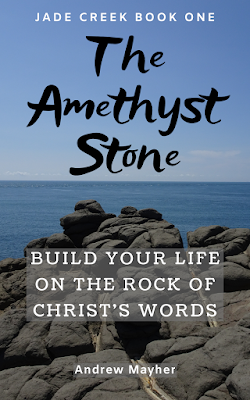 Synopsis:
Best friends Tanbi and Julian dream of becoming the next great seafarers, but the world is bigger and more dangerous than they ever imagined. The elders have declared a crisis: rogue crews plague the seas, growing with each passing year.

But there is good news. Elohim has spoken. One of them has been chosen to build a bridge from Scenic City to the great forests across Jade Creek, but if these childhood friends want to remain together through rough seas, there's only one way they can do it:

They'll have to return to the source of all things...

Preview:
“What once left me breathless and in awe now appeared as plain as the coast I grew up on. There was a thrill in me once, an electricity so real it was contagious and transformational, but alas, that feeling is long gone and now even the most vivid danger couldn’t satisfy the longing for adventure in me. All those great exploits that only few may encounter only built a thirst in my soul for something more, something nothing in this world could satisfy. And so I looked higher. I went back to what my father taught me, the belief of a child who is entrusted with the truth beyond the cosmos – Elohim.”

He grew up on stories about great evil and terrible men. That’s what linked his people together – story. He jumped from his father’s lap with his wooden sword flaying in the wind. He struck nothing but air and yet he vowed to fight evil to become the hero for the next tale. His whole childhood convalesced in a single dream – to wield the sword with honor. He never imagined the day he would find the evil he was looking for. He never would have believed it was real unless he saw it for himself – vowing to fight against evil until the day you stare it face to face and then realize you’re looking at your own reflection. How could someone vowing to defeat all that is wrong become the evil he once despised?

The Amethyst Stone on Amazon! 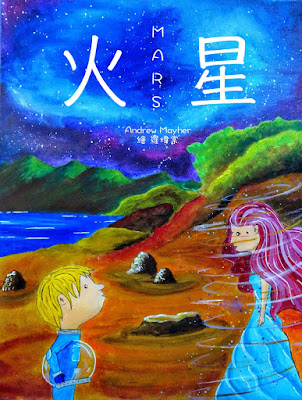 The Prime Minister ensured it was the answer to their biggest crisis.
總理確保這是他們最大危機的答案。

It was all about the girl.
一切都與女孩有關。

And he would do absolutely anything to save her.
他願意做任何事來拯救她。

But was it really possible for the power of time and space to move heaven enough to solve his crisis?
但是時間和空間的力量是否真的有可能移動天堂來解決他的危機？

Or was the worst really upon them?
或者世界最糟糕的境地已來臨了？ 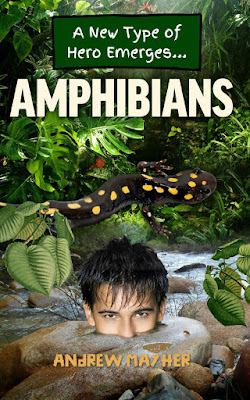 FreshAir. A simple environmental organization that found the answer to the greatest environmental threat the world has ever faced. Everything is safe now. Everything except us. A special co-op mission of people called Amphibians explore the new world where everything has grown ten times their normal size.

With incredible abilities to swim through physical matter with strength and speed, they are the only ones left who can face the full force of the wild. It's a fight to survive and humanity is losing. Now it's all up to this group of heroes with a special calling to bridge the gap between the wilderness and humanity.

Amphibians is an adventure that seeks to uncover the courageous spirit in each of us waiting to be revealed during the darkest times as long as we choose to never give up.

Buy the novel now on Amazon!

After Dusk: Our Greatest Battle

When I was in high school, the Lord of the Rings movies were coming out.

They were appealing for several reasons, the greatest of which was the epic battle between good and evil.

It was easy to put myself in the story, becoming one of the elves with skills harnessed to exact accuracy and precision.

What if there were really orcs fashioned by pure evil with the intent to destroy the pure and innocent?

It would be absolutely right to draw up our swords, war hammers, and bows and destroy them until not a single one remained.

I imagined how fun life would be if we were engaged in such a battle that was clearly good against evil, requiring us to band together to protect everything good in the world.

I longed for it, but I knew it would never be a reality...

In fact, there really are beings in this world that are pure evil, fashioned from pride, and ill bent to destroy everything good in this world.

They are fallen angels, intelligent spirits that were in a war with their Creator before our world existed.

And since we were created in the image of our God, we have entered that battle, but not all of us are on the winning side.

In fact, the Bible teaches that because of Adam and Eve's sin, all of us are born in enemy territory.

We were born as captives of evil, hurting each other and hurting ourselves until our life passed from us like wisps of smoke.

That was until the light broke forth into the earth as the man Jesus Christ, born of a virgin by the power of the Holy Spirit of God Himself.

Jesus Christ, the Word of God through whom all of creation was fashioned and knit together.

Jesus was the first human since Adam and Eve that wasn't born in enemy territory, a natural target for the fallen angels.

And so a new battle began.

Jesus fought for us. He represented us. He became like us.

And ultimately, he became the very sin we could never get free from.

The darkest hour of human history had come.

The fallen angels extinguished the last light of dusk.

All hope was gone.

But of course, it was only death.

And though sin could never survive the blows of death against it, Jesus could never be held by its sting.

So he rose, no longer bound with our sin, but pure and spotless again, representing our freedom from the bondage of our enemy.

Jesus came to set us free.

Then he gave us a sword, the Word of God.

And he commissioned us to go into all the world and proclaim the freedom from our bondage to evil, and to slay every fallen angel that gets in our way.

My deep longing for virtuous battle was true all along.

Every human being is born into a battle.

Which side are you on?

Email ThisBlogThis!Share to TwitterShare to FacebookShare to Pinterest
Labels: Thoughts

Where you live Matters

Have you ever wondered why the same group of people can listen to the same teaching and some people are inspired to change while others can't see any benefit to it at all?
There are two ways to live: in the flesh or in the Spirit.
The flesh is our natural, human, animalistic desires.
The Spirit is the breath of God, God Himself.
Only when someone is born again can they live in the Spirit, for only then can the Spirit take residence in them.
But everyone has the capability to live in the flesh; it is, after all, how we were born.
Some people think that sin is enjoyable and pleasurable; they think that is a fact for everyone.
But that's not true.
Sin is only enjoyable to the flesh, and your flesh loves it, can't get enough of it, even believes that sin fulfills its very purpose in life.
"I was born this way."
Yes, your flesh was born to enjoy and take pleasure in sin.
But the Spirit of God hates sin, despises sin, and finds it absolutely despicable in every way.
If anyone lives in the flesh, he or she will enjoy sin, but if anyone lives in the Spirit, he or she will find sin repulsive.
The same is true if you try to listen to a teaching from the Word of God in the flesh.
You will not understand it, you will find it useless and boring, and even try to block your ears from hearing it.
But if you listen in the Spirit, you will find the living waters of eternal life, the essence of God Himself.
That's why Jesus said, he who has ears to hear, let him hear.
If you listen with ears of flesh, you will never receive anything beneficial or life-giving from the words of Christ.
But if you listen with spiritual ears, in the Spirit, the words of Christ will become in you a spring of living water welling up to eternal life.
What you receive depends on where you live.
And there's only one way to change residency:
You must be born again.
He who has ears to hear, let him hear.
No comments:

Email ThisBlogThis!Share to TwitterShare to FacebookShare to Pinterest
Labels: Gospel

If I speak in the tongues of men and of angels,
but have not love,
I am a noisy gong or a clanging cymbal.
And if I have prophetic powers,
and understand all mysteries and all knowledge,
and if I have all faith, so as to move mountains,
but have not love,
I am nothing.
If I give away all I have,
and if I deliver up my body to be burned,
but have not love,
I gain nothing.
Love is patient and kind;
love does not envy or boast;
it is not arrogant or rude.
It does not insist on its own way;
it is not irritable or resentful;
it does not rejoice at wrongdoing,
but rejoices with the truth.
Love bears all things, believes all things, hopes all things, endures all things.
Love never ends.
As for prophecies, they will pass away;
as for tongues, they will cease;
as for knowledge, it will pass away.
For we know in part and we prophecy in part,
but when the perfect comes, the partial will pass away.
When I was a child, I spoke like a child, I thought like a child, I reasoned like a child.
When I became a man, I gave up childish ways.
For now we see in a mirror dimly, but then face to face.
Now I know in part; then I shall know fully, even as I have been fully known.
So now faith, hope, and love abide, these three;
but the greatest of these is love.
1 Corinthians 13
“Scripture quotations are from The ESV® Bible (The Holy Bible, English Standard Version®), copyright © 2001 by Crossway, a publishing ministry of Good News Publishers. Used by permission. All rights reserved.”
No comments:

Email ThisBlogThis!Share to TwitterShare to FacebookShare to Pinterest
Labels: Gospel