The Good News In Amphibians 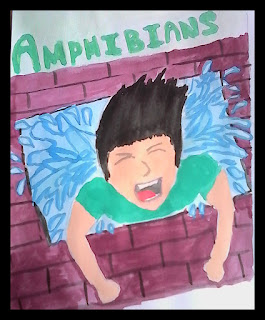 There's a biblical story line woven symbolically through Amphibians. In each of the three parts within the novel, there's a theme of being known versus being exposed. Everything that is hidden will be revealed. It started in the garden of Eden where Adam and Eve partook of the forbidden fruit and hid their shame. There's an old man and a new man. The old man fears exposure while the new seeks to be fully known by his Father. In part one, Emily is represented with the former while Max is represented with the latter.

In part two, this theme is more explicit in that a whole community is hidden under animal masks. There's a division between two people groups as one has a fear of exposure and the other has a desire to be fully known. This is a huge theme in scripture with countless prophets beckoning Israel to come back to God's purpose. It's through prophetic revelation and the people's repentance that reconciliation comes, both with God and with each other.

Part three is symbolic of the work of Christ coming into the world to become one of us in order to save us. Jesus was fully known by God and yet had to use different ways to express his true identity. In the end, he defeated our enemies and won the victory for us, which ultimately brought a crossroads to the whole human race. In part three, Thomas is this Christ-like figure who is born into an oppressive world. Thomas has to make the same choices as the others: Will he be exposed or come into the light to be fully known?

Ephesians 5:13 But everything that is exposed to the light becomes visible, 14 for the light is making everything visible.

I didn't plan to have a biblical story line woven throughout this novel, but I prayed God would us it for his glory and bless others with it. It's all God. He is amazing, good, and love. The righteous have no fear of exposure. Our Father will reveal every hidden thing and we will be fully known by the only true God forever and ever. Amen.