Settlers of Catan Adapted for the Classroom 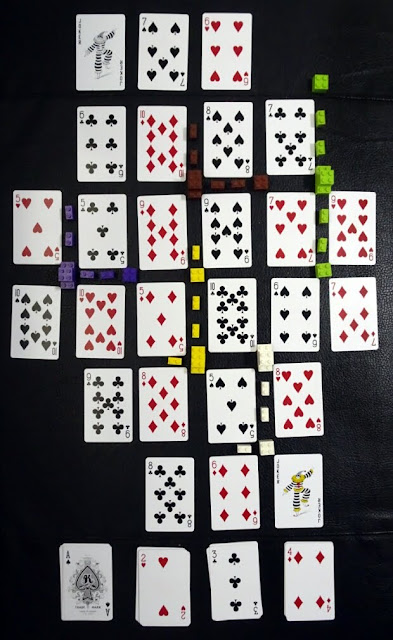 One person (usually the teacher) will be the Banker. The Banker's job is to collect and distribute cards, roll the dice, and move the jokers. (this will be explained later)

1) Set up the game as shown in the picture. Randomly distribute cards with an equal number of each suit (spades, hearts, clubs, diamonds). The remaining cards are placed in front of the Banker in four piles, separated according to suit.
* Make sure no single location on the board has all four suits touching each other.

2) Moving clockwise, each player rolls the dice. From the highest roll to the lowest, each player places one village on the board (at the corner of four cards). In the picture, villages are represented by 2x2 blocks.

3) The Banker rolls the dice. 1 = Spades, 2 = Hearts, 3 = Clubs, 4 = Diamonds, 5 = Jokers, 6 = Reduce cards to six. If 1 to 4, the Banker will distribute cards to each player whose village is touching the suit rolled. For example, if a 1 is rolled, then the green colored village in the picture will be given one spade card. If your village is cornered with two spade cards, then you collect two. The same applies rolling 2, 3 or 4.

If the Banker rolls 5, Jokers will block certain cards. The top Joker will move toward the right, then snake down left and right to the bottom of the board. The bottom Joker will move left, then snake right and left toward the top of the board. The Banker will move each Joker three spaces when a 5 is rolled. For example, if the Jokers are moved three spaces, then the 9 of clubs on the bottom and the 7 of clubs on the top will be blocked. If a 3 is rolled next, the green castle and village cannot collect any club cards. However, they can still collect spades, hearts, and diamonds.

If the Banker rolls a 6, each player must count their cards. If they have more than six cards, they must return additional cards to the Banker. If six or less cards, then no action is required.

4) This game uses simultaneous play. The Banker rolls the dice and each player can collect cards accordingly from the Banker. They can also freely trade with each other at all times. Also, they can freely build at anytime (see #5). Once all players are finished collecting cards, trading cards, and building, then the Banker will roll the dice again.

* You can trade in three of the same card for one of a different suit. For example, the yellow village and castle are not touching any hearts. If no one will trade with them, they can trade three diamonds (or another suit) for one heart.

5) Use your suited cards to build roads, villages, and castles. Here's how to build each one:

Here are some possible combinations to win:

Can you see which color is the winner in the picture?