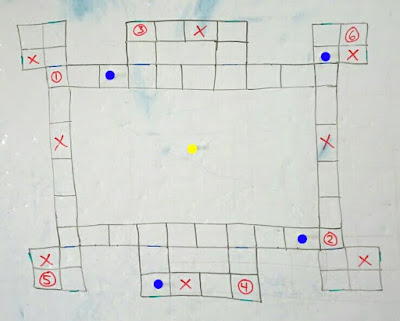 Object- Steal all the paintings or catch the thief

1) Draw the game board. Red X's are paintings. Numbers are cameras.

2) Draw an additional copy of the game board on a piece of paper.

2) The thief moves first and always moves 3 spaces each time, but his movements are kept secret until he is seen. That means he will draw his movements on the paper with a single line.

3) The security guard chooses to move his piece to see or catch the thief or select a camera to see the thief.

* For example, if he selects camera #2, the thief must show himself if he is on any of the spaces above or to the left of the #2 (which would be 5 spaces above and 9 spaces to the left).

* Cameras cannot see through doors (indicated by the green lines).

* If the security guard moves his piece instead of selecting a camera, he will ask if he can see the thief from his current position after moving (but again he cannot see through doors).

5) The thief tries to steal as many paintings as he can and then exit through one of the windows (marked by the green lines).

* If the thief is seen, he must place a magnet on the board where he is, but game play resumes normally until he escapes or is caught.

* If the thief is caught, he loses half the paintings he stole (if an odd number, round up).

6) The security officers must land on or pass through the thief to catch him.

After one round, let a new student be the thief and see how many paintings he can get!