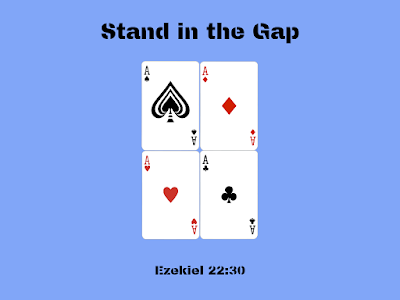 1) Place 4 A's in a block formation. This is your castle.

2) Flip cards one at a time and place them on the board next to another card (horizontally or vertically).
* Numbered cards must be placed in succession of increasing (+1) or decreasing (-1) order with the card next to it (vertically and horizontally, but not necessarily diagonally).
* Identical numbers may also be placed next to each other.
* A's, Jacks, Queens and Kings are neutral and are not counted as part of succession order.

4) When at least one King and one Jack are on the board, move whichever was placed first.
* If Kings were placed first, move the King nearest to an A first. (use same directional order below)

6) If any King is eliminated, discard the Jack and return to normal play until at least one King and one Jack are on the board again simultaneously.

7) Build a wall of cards around your castle (4 A's) with at least one A remaining when the deck runs out to win.

1) All A's are eliminated.
2) You cannot make a move.
3) You do not have a complete wall encircling your castle when your deck runs out.

Queens: Blocking Cards
a) Place anywhere on the board touching another card (horizontally or vertically).
b) These cards cannot be passed through, eliminated or moved from their original location.
c) These cards (like Jacks and Kings) are not counted as numbered cards and can therefore be used to fill in gaps in your wall, such as between a 2 and a 9.

Jacks: Attacking Cards
a) Place anywhere on the board touching another card (horizontally or vertically).
b) These cards seek to eliminate any King, then they are discarded from the game.
* 1 Jack cannot eliminate 2 Kings. A spade and club cannot make a move that will pass through 2 Kings. A heart may have 2 Kings on either side of it to eliminate, but can only choose 1 to discard.
* After being placed on the board, Jacks and Kings can only move through or on previous placed cards (with the exception of Queens).

Jokers: Bomb Cards
a) Place anywhere on top of another numbered card.
b) Discard all cards surrounding the Joker (even diagonally, but not Queens, Jacks or Kings).
* If the first card you draw in the game is a Joker, you lose.

* Play with 2 people by having someone control the Kings.

Here's an example of how to play: