Assemble your team to win.

What you need: 1 deck of cards and coins.

Choose to play with 2, 3 or 4 teams (depending on how many people you have).

Note you can remove some identities depending on how many players you have or you can place extra cards face down, but make sure they are not Aces (shuffle them out first before adding Aces). During the game, only Aces can interact with anonymous cards. 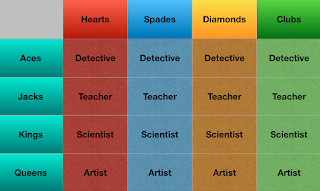 Scientists (kings) can stop 1 person from performing an action 1 turn.

Artists (queens) apply any power enacted on them to that other person. They may also use another person's action, but the same effects they perform on others apply to them as well.

Set up
Each person gets a card face down.

How to play
Moving clockwise, each person gets a chance to talk and do an action.

Action
Detectives may choose whether or not to tell everyone someone's identity or they can tell us what team that person is not on.

Teachers place a coin heads up on the card of the person they silence. That coin is removed after that next person's turn.

Scientists place a coin tails up on the card of the person they stop. That coin is removed after that person's next turn.

Artists are like mirrors. Whatever you do to them will be done to you. Whatever they do to you will be done to them. On their turn, they can choose 1 person to perform an action on. That person will then reveal their identity and both players are affected by the action.

How to win
Guess all the players on your team during your turn. After guessing, you will reveal your card. Then everyone on your team must raise their hand. If you are correct, you are the winner. If you are wrong, your entire team is out of the game.